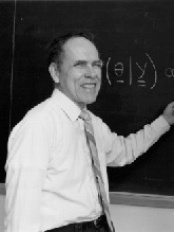 Warren Earl Stewart, McFarland-Bascom Professor Emeritus of Chemical Engineering at the University of Wisconsin-Madison, age 81, passed away in March of 2006.

As a student at the University of Wisconsin he majored in chemical engineering and graduated with a B.S. degree in 1945. He was the first undergraduate student in the history of the College of Engineering to graduate with a straight-A academic record. He continued at UW-Madison and received his MS degree in 1947. During World War II, Warren enlisted in the U.S. Navy (1944-1946).

He graduated from the Massachusetts Institute of Technology in 1951 with a Doctor of Science (ScD) degree in Chemical Engineering. His MIT experience proved valuable in many ways, introducing him to numerical analysis and computational techniques, which were essential to his research at the dawn of the electronic computing age. He worked for Sinclair Research Laboratories from 1950 to 1956 as a Research Engineer. He joined the faculty in the Department of Chemical Engineering at UW-Madison in 1956, where he was an active faculty member for 40 years and continued his research following retirement in 1997.

While serving as chairman of the department (1973-1978), he recruited and nurtured several young faculty, who went on to become international leaders in their field. He supervised many PhD students and postdoctoral fellows, who today hold distinguished positions in universities and industrial research laboratories around the world.

Beyond his influence on his own students, he was an inspiring teacher and valuable consultant. Warren also contributed to chemical engineering in South America and Mexico through his lectures (in Spanish), while a visiting professor. Warren was a coauthor with R. Byron Bird and Edwin Lightfoot of the 1960 textbook, Transport Phenomena, which changed the direction of chemical engineering teaching everywhere in the world. It is considered a classic and landmark textbook in chemical and biological engineering. Over 300,000 copies have been sold in the English language, and translations have been made into Spanish, Italian, Czech, Chinese, and Russian. A second edition was published in 2001. His last text, Computer-Aided Modeling of Chemically Reactive Systems, and the accompanying software was written with co-author Michael Caracotsios and published posthumously.

Throughout his career, he had more than 100 published research articles. He was also president of Stewart and Associates Engineering Software, Inc. Although he was a quiet and modest person, Warren received many awards for his work including the Benjamin Smith Reynolds teaching award, Byron Bird research award, Fellow of American Institute of Chemical Engineers, Phi Beta Kappa, Tau Beta Pi, and election to the National Academy of Engineering. Warren’s hallmark throughout his career was understated excellence in his work and unfailing kindness to students and colleagues.

Warren was well known for his sly sense of humor and his ability to instantly produce jokes on just about any topic. He loved puns and had a warning sign on his desk given to him by his colleagues, "Incorrigible punster. Don't incorrige."

Memorials may be made to The Warren E. Stewart Memorial Scholarship Fund online at