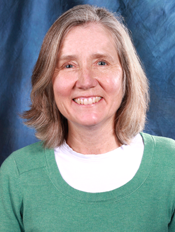 My group uses biophysical and biochemical approaches to better understand protein misfolding and aggregation in neurodegenerative disorders such as Alzheimer’s and Huntington’s disease. “Amyloid” is a generic term describing fibrillar protein aggregates of a cross-beta sheet structure. Observations of amyloid deposits in brain tissue of patients with neurodegeneration date back about 100 years, but it was not till the mid 1980’s that the protein associated with Alzheimer’s deposits, beta-amyloid (Abeta) was sequenced. Since then, a number of neurodegenerative disorders have been linked to amyloid protein deposits. These proteins differ in sequence and native structure, but all misfold into structurally related aggregates. The generally accepted hypothesis is that formation of amyloid is a causative event in disease pathology.

Abeta is a small (4 kDa) proteolytic product of the precursor protein APP. As a monomer, Abeta is natively unfolded, but it spontaneously self-associates into dimers, larger oligomers, and fibrillar aggregates. The deposition of Abeta fibrils as amyloid deposits in the brain is one of the defining pathological features of Alzheimer’s disease (AD). Most researchers believe that Abeta aggregation is the primary cause of the neuronal degeneration observed in this disease. We are currently exploring the hypothesis that a common protein, transthyretin (TTR), serves to regulate Abeta aggregation and suppress its toxicity. We hypothesize that TTR is a natural anti-Alzheimer’s ‘drug’. In our work, done in collaboration with Dr. Jeff Johnson (Pharmacy), we are identifying the specific Abeta-binding site on TTR, delineating the detailed mechanism by which Abeta interacts with TTR, and designing peptidomimetics that mimic the Abeta-sequestering activity of TTR.

One of the intriguing findings from our work was that the domain on TTR that binds to Abeta is predicted to be ‘amyloidogenic’ itself. Another intriguing finding is that initial binding of Abeta to  causes TTR dissociation – which is considered to be the first step on the pathway of TTR fibril formation. In other words, if homotypic (self) indefinite interaction occurs, either Abeta or TTR will form large toxic aggregates. However, heterotypic interaction between Abeta and TTR, involving the same domains that drive self-association, appears to prevent toxicity. Based on these findings, we hypothesize that there is an amyloid regulatory network. Specifically, heterotypic interactions, driven through amyloidogenic domains, compete with homotypic interactions and inhibit the growth of toxic self-assemblies. We are beginning studies to test this hypothesis over a broad range of amyloid-forming proteins and peptides.

Huntington’s disease is characterized by the abnormal expansion of a glutamine repeat domain in the protein huntingtin. Expansion leads to aggregation of huntingtin, which is believed to cause neuronal cell death. The fact that expanded glutamine domains would cause aggregation was at first considered surprising, because glutamine is a very hydrophilic residue. This side chain contains both a hydrogen bond donor and hydrogen bond acceptor; as the length of the glutamine repeat increases, multivalent side chain-side chain hydrogen bonding successfully competes with hydrogen bonding to the solvent. We are conducting fundamental studies of the process by which repeat-containing peptides, such as polyglutamine, self-associate. Our studies indicate that fibril growth from peptides containing glutamine repeats occur via hydrophobically driven assembly into disordered (‘liquid-like’) oligomers, which eventually converted to ordered fibrillar aggregates. We are exploring the role of water and dehydration in fibril assembly mechanisms, and examining the aggregation of other repeat-containing peptides such as polyasparagine.