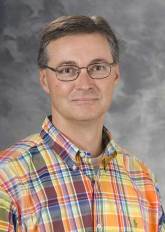 Professor Bonazza's interests are in the experimental investigation of impulsive, unsteady fluid flows such as shock-interface interactions, shock-driven mixing, and shock-initiated combustion.

The interaction of a shock wave with the interface between two fluids of different densities enhances the mixing that takes place at the interface. In some cases the mixing is detrimental to the objectives pursued in the application. For example, in inertial-confinement nuclear fusion experiments, a spherical, hollow shell containing a deuterium-tritium mixture is imploded by a shock wave generated by 192 laser beams focused on it. The objective is to raise the temperature and density of the nuclear fuel to obtain a self-sustained fusion process. Upon acceleration, the ablated shell material mixes with the fuel, either preventing ignition or causing a lower yield than thoretically predicted. On the other hand, in supersonic combustion systems, where fast, thorough mixing between fuel and oxidizer is indispensable to effective burning because of the very short residence time of the oxidizer in the combustion chamber, shock-enhanced mixing could be used advantageously.

Investigations are performed in a large, vertical shock tue facility.  In one experiment, a shear layer between different gases is accelerated by a planar shock wave:  the interface is set into downward motion and its evolution is studied with a variety of techniques including planar Mie scattering, planar laser induced fluorescence, and particle image velocimetry.  In a second experiment, a soap bubble filled with a stochiometric mixture of hydrogen and oxygen diluted in a neutral gas (e.g. xenon) is released in free fall inside the shock tube and accelerated by a planar shock wave.  Diffraction of the shock across the bubble generates a complicated system of reverberating waves, the distortion of the bubble, the formation of one or more vortex rings, and the ignition of the hydrogen-oxygen mixture.  The bubble evolution is investigated with planar Mie scattering, and the imaging of the chemoluminescence due to the decay of the OH radical.