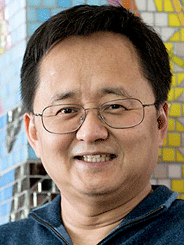 Sang Kim joined the UW–Madison Department of Chemical Engineering (now Chemical and Biological Engineering) in 1983 and over the subsequent 15 years in Madison, established a world renowned research program in particulate microhydrodynamics. Three decades later, Kim’s name is still closely associated with modern computational techniques for particle-particle interactions in a viscous medium for complex geometries. These methods also turned out to be especially useful in computational models for predicting and understanding the motion of biological macromolecules, and launched Kim on a trajectory between 1998-2012 that took him to the pharmaceutical industry (Parke-Davis and Eli Lilly), the National Science Foundation, Purdue University and the Morgridge Institute for Research at UW–Madison. Kim came full circle when he returned to the UW CBE department in the fall of 2012-13, where he established a research program on pharmaceutical informatics and rational, computer-aided design of anti-cancer therapeutics. Over the years, Kim’s research efforts have been recognized through many awards, including the 1992 Initiatives in Research Award from the National Academy of Science, the 1993 Allan P. Colburn Award from the AIChE, 2001 election to the National Academy of Engineering and the 2013 Ho-Am Prize in Engineering from the Samsung Foundation.